The enzyme serrapeptase (which is sometimes referred to as serratiopeptidase) is often described as a magic bullet for cancer. That's an overstatement, but there is a growing body of anecdotal evidence than serrapeptase can be very helpful for achieving remission and staying in remission from cancer, if it is used at the right time and in the right dosage. But first let's start with an explanation of why several kinds of proteolytic enzymes make a difference in beating cancer and staying in remission for good.

Cancer Is Its Own Worst Enemy

Enzyme therapy for cancer, at least for the kinds of cancer that form solid tumors, takes advantage of the fact that a cancerous tumor is its own worst enemy. The outer layers of a tumor push into neighboring healthy tissues. The inner core of a tumor is always fighting with the outside of a tumor for oxygen and nutrients.

Cancerous tumors have an unusual ability to use sugar without oxygen to make energy, but at some point the innermost reaches of a cancerous tumor will have too little oxygen even for cancer cells. These interior cells will start to die off. But it's the death of cells in the middle of the tumor that makes it harder for the immune system to fight the stronger cancer cells on the outside of the tumor.

Why Killing Part of a Tumor Sometimes Helps the Rest Survive

The human immune system kills cancer cells with a substance known as tumor necrosis factor. This substance is also known by its abbreviation, TNF.

The death domain even sends out signals to other white blood cells known as neutrophils to join in the attack. These neutrophils travel through mucus or lymph or on the linings of healthy organs to reach the cancerous tumor. Eventually the macrophage can surround and consume a cancer cell, recycling its components as nutrients.

As hard as it is to fathom, nearly everyone has this process going on at one time or another, even if he or she does not develop diagnosable cancer. When a cancerous tumor is still just a cluster of 1,000 to 10,000 cancerous cells, TNF and the immune system usually can kill it.

Some scientists estimate that 50% of the population has at least one of these micro-tumors somewhere in the body at any given time. Chances are your own body has created several would-be cancerous tumors at some time in your own life. But the TNF system can be a victim of its own success.

Enzymes to Clear Out the Debris of Cancer

Most of us know that enzymes help us digest our food. While there are thousands of different enzymes with tens of thousands of important functions in the human body, not just digesting food, the enzymes that are the most important to treating cancer are those enzymes that help break down proteins like the proteins that are also broken down by the cancer-fighter TNF. These enzymes are known as proteolytic enzymes.

It's well-established principle in enzyme biology that proteolytic enzymes fight cancerous tumors. Back in the 1920's, a physician named Dr. Max Wolf noticed that people who have cancer tend to lack proteolytic enzymes in their digestive tracts. The reason for this is that these enzymes are busy helping the immune system fight cancer (not that cancer is caused by not getting enough enzymes).

Dr. Wolf and his coworker Dr. Helen Benitez started isolating digestive enzymes and then using them as a treatment for cancer. They developed a treatment that has been used by approximately 25,000,000 cancer patients over the last 80 years called Wobenzym.

Fighting Fibrin (and Cancer) with Wobenzym

Wobenzym is a combination of six proteolytic enzymes, trypsin, chymotrypsin, pancreatin, rutin, bromelain, and papain. When these enzymes get into the bloodstream, they help break up the cellular debris caused by all kinds of inflammation, including the inflammation the immune system uses to fight cancer. These enzymes act as a kind of clean-up crew that allows macrophages to lock onto cancer cells and finish the process of their destruction.

In particular, these enzymes break down a substance called fibrin. This is the protein that holds a tumor together, and keeps the immune system from getting inside the tumor. Fibrin helps the tumor grow its own blood supply. And fibrin hides the tumor from both neutrophils that would spray it with irritant chemicals and macrophages that would eventually surround and consume dead or dying cancer cells.

The ability of enzymes to break down fibrin “de-cloaks” the cancer tumor. When a tumor's outermost layer is covered with a layer of the fibrin-like substance known as fibrinogen, the immune system may not be able to find it. When fibrin breaks down, the immune system breaks in and destroys the tumor.

Or at least that is what Drs. Wolf and Benitez always thought was happening. They only knew for sure that their cancer patients were more likely to recover when they were given the enzyme formula. It wasn't until 1993 that anyone ran a clinical trial.

After 73 Years, Enzymes Get a Clinical Trial

In the early 1990's, the National Cancer Center invited a Manhattan-based cancer specialist named Dr. Nicholas Gonzalez to run a test of enzymes as a treatment for cancer of the pancreas. The National Cancer Institute chose to test enzyme products on pancreatic cancer because there is usually very little that conventional medicine can do for it. Only 1 in 20 people diagnosed with pancreatic cancer lives five years after diagnosis, and 76% die within the first year after diagnosis.

But the patients of Dr. Gonzalez lived a lot longer. Of his patients taking enzymes, 81% lived longer than one year (compared to 24% with conventional treatment), 45% lived two years, and 36% lived three years. In 2010, Dr. Gonzalez reported he had a patient survive inoperable pancreatic cancer for a full 20 years. (Robert Rister, a medical friend of mine, met her in 2001, and she seemed quite healthy at the 11-year mark.)

So why isn't enzyme therapy standard procedure for cancer? It turns out there are a few complications.

While it is unquestionably a good thing to break up cancer tumors, most cancer patients have a lot going on in their bodies. They may be given strong antibiotics to prevent infections. They may be put blood thinning medications to fight the blood clots that these antibiotics can cause to form.

Doctors who are not convinced of the power of enzyme therapies are very hesitant to try them because of the need to prevent both clots and bleeding. Most doctors want to see the results of treating tens of thousands of patients under controlled conditions—the fact that 25 million patients have been treated under uncontrolled conditions isn't enough—before they give up on conventional chemotherapy and radiation, despite the miserable track record of these methods for treating most kinds of cancer.

And because enzyme therapy isn't mainstream, it is almost never covered by insurance.

Which Enzymes Are Used in Cancer Therapy?

Enzyme therapy for cancer isn't a do-it-yourself project. You have to let your doctor know you are using enzymes because of issues like preventing clots and bleeding. However, there have been some really amazing results form taking a combination of:

The combination of enzymes slowed the progression and spread of:

People lived longer and had fewer side effects over a period of up to 5 years when they took this simple and inexpensive combination of enzymes under a doctor's supervision. Tests of another combination of just five enzymes yielded similar results. But where does serratopeptidase (serrapeptase) fit in?

Serratiopeptidase is even stronger than bromelain, papain, trypsin, chymotrypsin, rutin, and pancreatin. That's exactly why you don't use it in fighting active cancer!

14 thoughts on “Serrapeptase and Cancer” 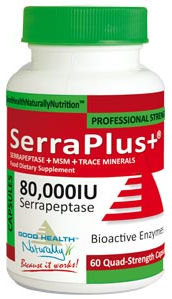